Pursuing Court Intervention to Save Lives

The Red Flag Law, also known as the Extreme Risk Protection Order law, prevents individuals who show signs of being a threat to themselves or others from purchasing or possessing any kind of firearm.

The Red Flag Law provides procedural safeguards to ensure that no firearm is removed without due process while helping to prevent tragedies, like the school shooting in Parkland, Florida, and the racist mass shooting in Buffalo.

This law builds on New York's strongest in the nation gun laws and makes New York the first in the United States to empower its teachers, school administrators, and mental health professionals to help prevent shootings by pursuing court intervention.

How To Prepare and File

An Extreme Risk Protection Order (ERPO) is a court order issued when a person may be dangerous to themselves or others.
An ERPO prohibits a person from purchasing or possessing guns and requires the person to surrender any guns they already own or possess.
To file an ERPO, you will need to submit an ERPO application and any other necessary documents to the respondent’s local Supreme Court.
Complete Filing Instructions and Forms 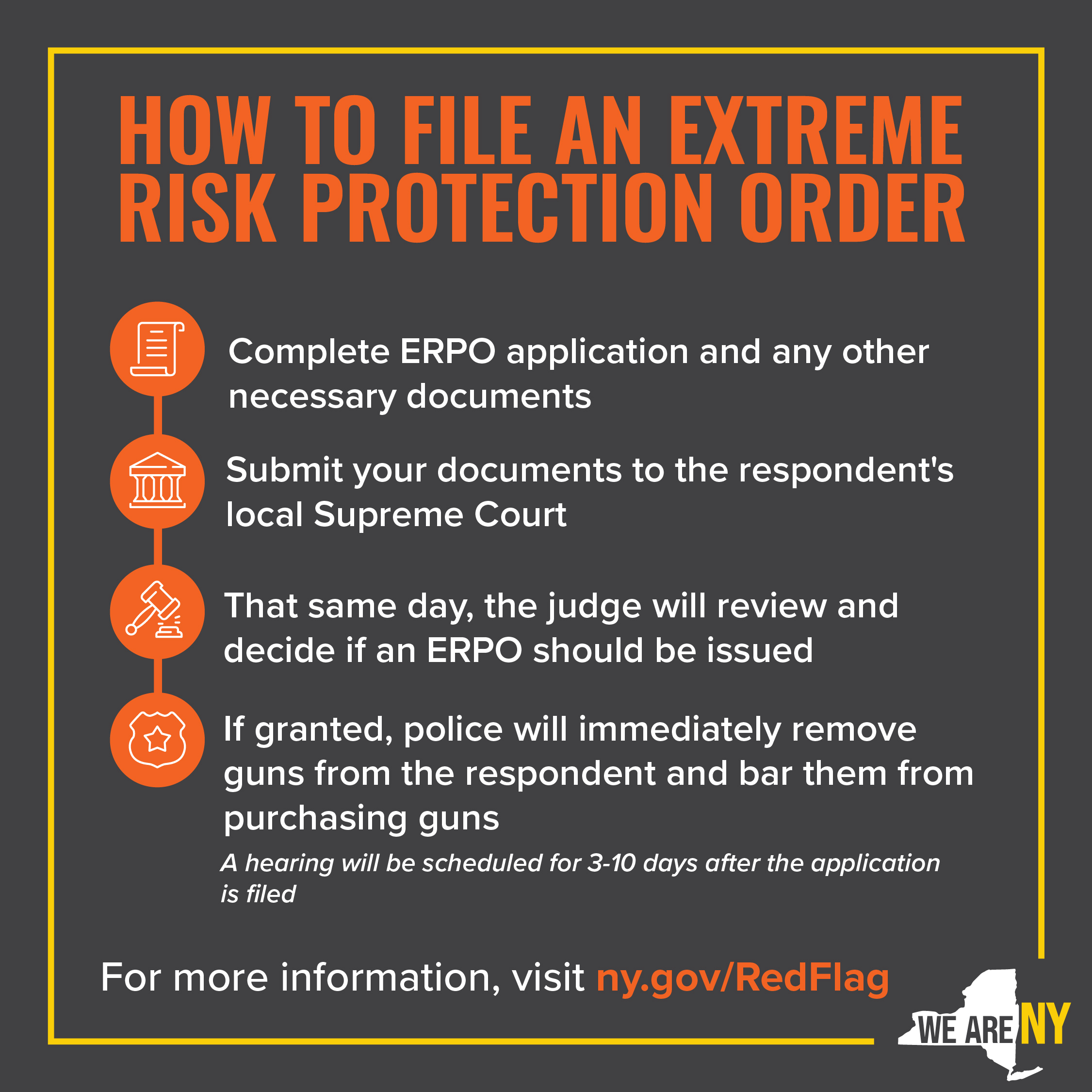 Always call 911 in an emergency

Executive Order
On May 18, 2002, Governor Hochul signed an Executive Order requiring State Police to file for an Extreme Risk Protection Order (ERPO) whenever they have probable cause to believe that an individual is a threat to themselves or others.
Landmark Legislation Package
On June 6, 2022 Governor Hochul signed a law that expands who may file an ERPO petition to include health care practitioners who have examined an individual within the last six months; ensures mental health practitioners' reports on potentially harmful individuals are considered closely when determining whether to issue a firearm license; requires police and district attorneys to file ERPO petitions when they have credible information that an individual is likely to engage in conduct resulting in serious harm; and requires State Police and the Municipal Police Training Council to create and disseminate policies and procedures to identify when an ERPO petition may be warranted.
Expansion in Red Flag Law Usage
On October 24, 2022, Governor Hochul announced courts across the State have issued 1,908 Extreme Risk Protection Orders, more than doubling the number of orders issued since the law became effective on August 25, 2019.
Strengthening the Red Flag Law

On June 6, 2022, Governor Kathy Hochul signed a landmark legislative package to immediately strengthen the state's gun laws, close critical loopholes exposed by shooters in Buffalo and Uvalde and protect New Yorkers from the scourge of gun violence that continues to infect our nation and endanger our communities.