Honoring Those Who Served

April 6, 2017 marks the 100th anniversary of our country’s entry into World War One, a war that engulfed most of Europe since 1914. United States troops tipped the balance toward Allied victory, forever transforming America’s role in the world - but this victory came at a great cost. WWI claimed over 17 million lives total – more than 116,000 United States troops were killed, 20 million wounded. No state would sacrifice more than New York. Over 500,000 New Yorkers served, and of those, 13,956 lost their lives.

Once called “the War to End All Wars,” World War I was one of the bloodiest conflicts in human history and marked the dawn of devastating modernized weaponry such as poison gas, aerial bombing, machine guns and long-range artillery. Among the New York regiments were the 69th Infantry Regiment, known as the “Fighting 69th,” and the 369th Infantry Regiment, the first African-American regiment to serve in combat in the war. Twenty-five New Yorkers received the nation’s highest honor, the Medal of Honor, for their valor.

About the WWI Commemorative Commission

The history of New York State and our country is a living history. Help commemorate the centennial of the United States’ entry into World War I by sharing your relatives’ stories, sending in photographs of the World War I monuments and plaques in your community, and submitting events happening in your community. 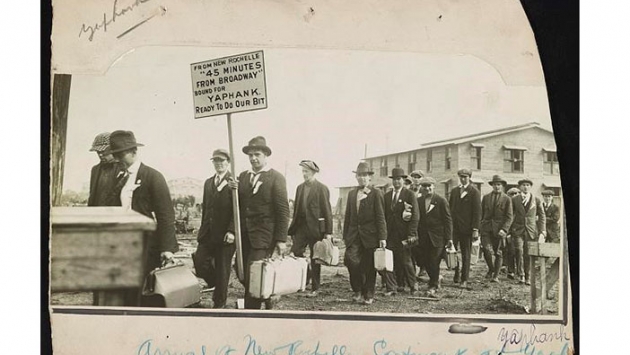 The arrival of the New Rochelle contingent at Camp Upton, Yaphank. Library of Congress. 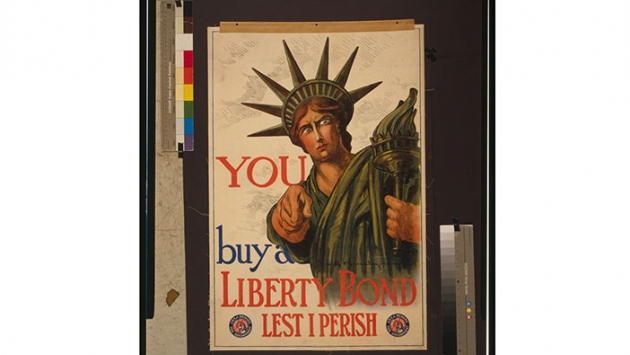 You--Buy a Liberty bond lest I perish. Library of Congress. 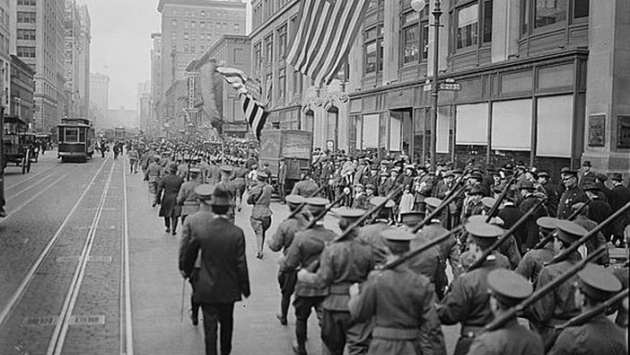 Poster of war effort listing hundreds of recent American volunteers and the addresses of recruiting stations in Frank Leslie’s Weekly, circa 1917. Library of Congress. 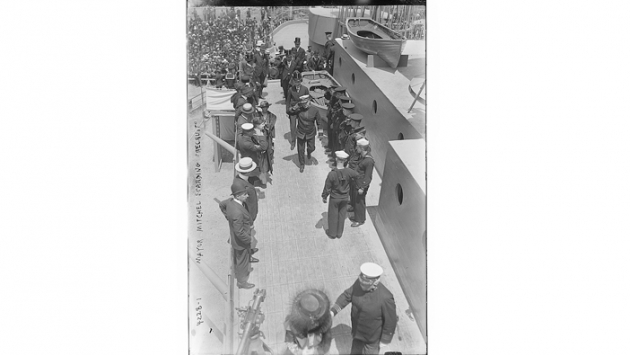 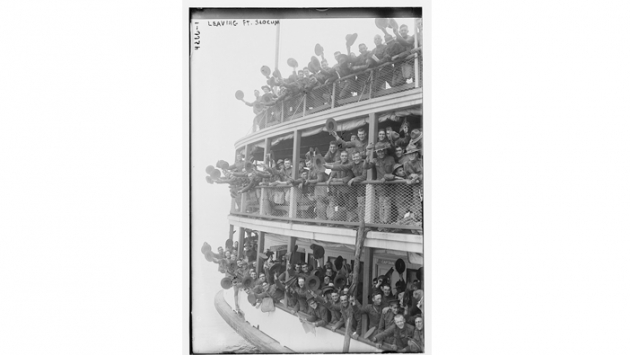 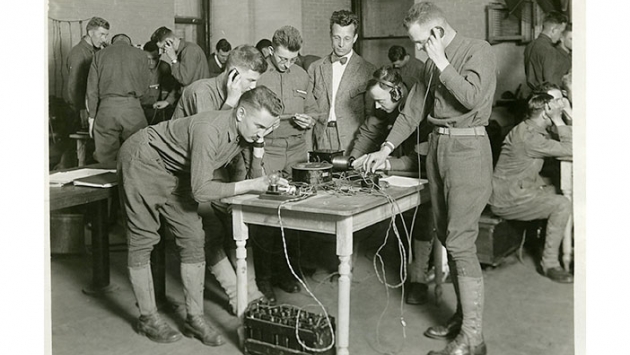 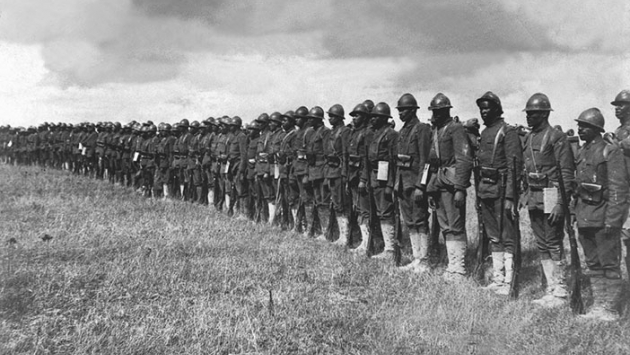 Soldiers of the 369th Infantry Regiment stand at attention with French rifles and helmets, 1918. National Archives. 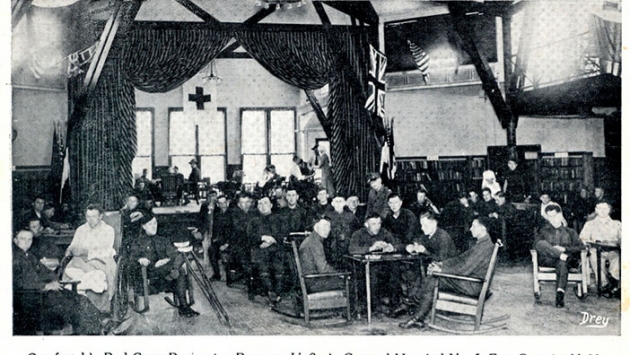 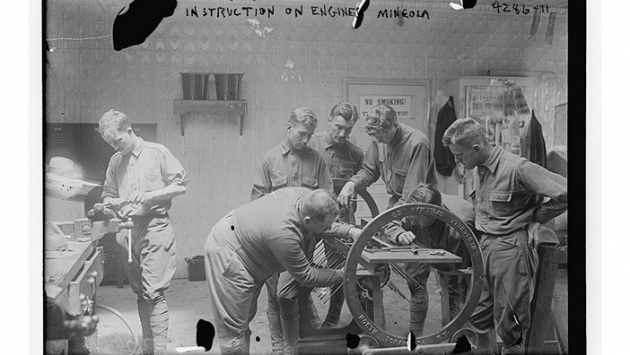 A class on engines at the aviation training school at Mineola Air Station, Long Island, N.Y., 1918. Library of Congress. 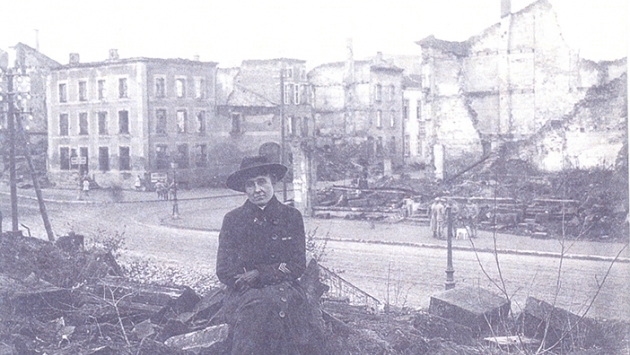 Army Nurse Corps Chief Nurse Beatrice Mary MacDonald. Serving in France after losing one eye when her hospital tent was bombarded by the Germans in August, 1917. MacDonald is the first woman awarded the Purple Heart. National Purple Heart Hall of Honor 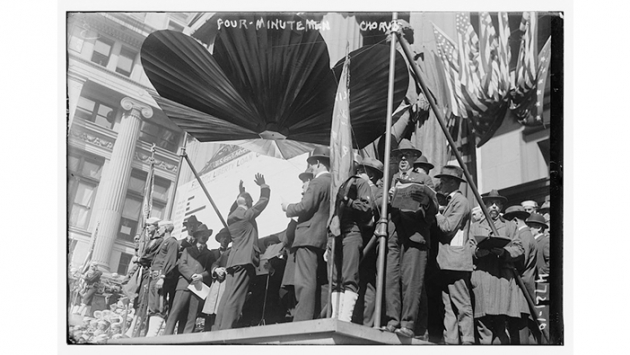 Rally for the Fourth Liberty Loan Campaign, Federal Hall, New York City in 1918 during World War I. The Four Minute Men was a public speaking organization of the Committee on Public Information. Library of Congress. 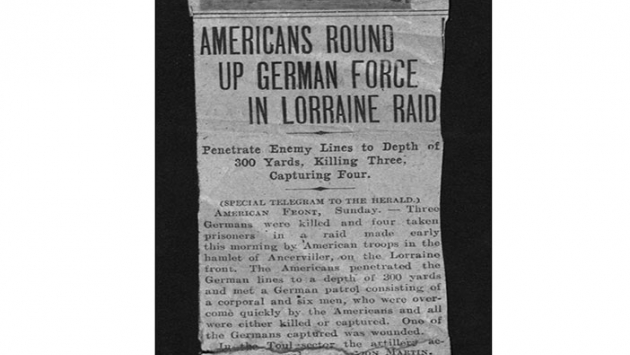 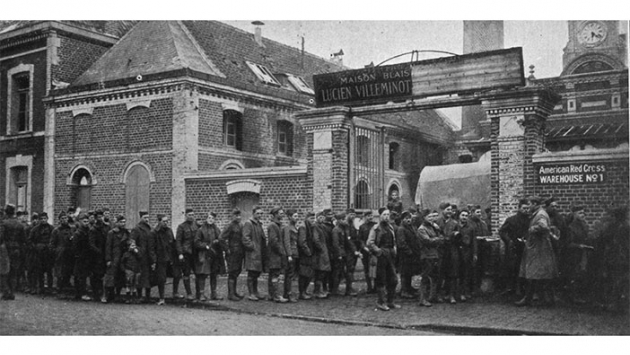 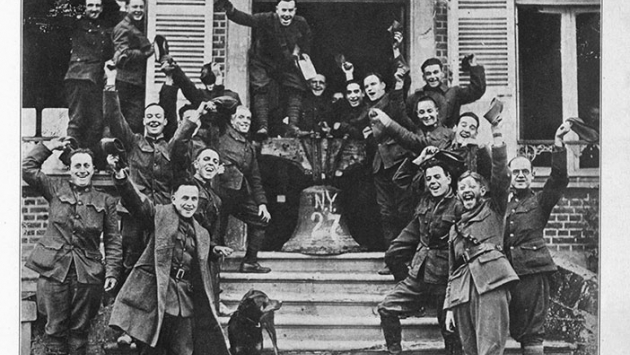 The 27th Division learns of the signing of the Armistice, “Pictorial Record of the 27th Division,” Harper & Brothers, Publishers: New York: 1919. Courtesy of Stuart Lehman. 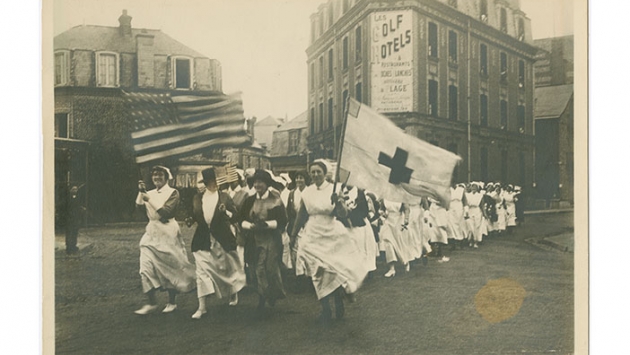 Nurses of Base Hospital No. 2 in a parade for Anna Maxwell, founder of the Columbia School of Nursing. Archives & Special Collections, Columbia University Health Sciences Library.

View a list of New Yorkers who died while in service during World War I.

View a list of New Yorkers who were awarded the Medal of Honor for their service in World War I.

The New York National Guard engaged in severe fighting in the Somme offensive, pushing the enemy into retreat.

Called “The Rainbow Division,” the 42nd was composed of troops from 26 states and the District of Columbia.

The 77th Division comprised draftees, who were mostly from New York City. The Division trained at Camp Upton in Yaphank, on Long Island.

Watch brave soliders talk about their experiences during WWI.

Receive free access thanks to the NYS Archives to Ancestry.com for WWI military service records for NYers who were enlisted or drafted in NY.

On the centennial anniversary of America’s entry into World War I, New York’s commemoration activities will convey the pivotal role New Yorkers played in the War and help us preserve the names and stories of those who served. This war changed us as a nation, and no state dedicated more to the Allied victory than did New York.

New York National Guardsmen like Sgt. Henry Johnson, and Lt. Col. William "Wild Bill" Donovan - who won medals for heroism-- set an example of heroism and self-sacrifice during the war, inspiring American Soldiers today. The legacy of World War 1 remains with us today and it's fitting that we mark this centennial for our Soldiers, our Airmen our nation and our state.

New York and New Yorkers played a critical role in fighting what everyone hoped would be the “War to end all Wars,” from providing soldiers and supplies, to building planes and training pilots, and providing care to the injured. There are no surviving members of the military from WWI, but we can recognize and honor their service on this centennial, and commemorate the tradition of service above self that has been passed down through generations of New Yorkers to the present day.

Director of the Division of Veterans’ Affairs

New York played a pivotal role in America’s defense of the ideals of freedom and democracy. The New Yorkers who served during World War I faced a conflict that the world had never previously seen. They faced this challenge with courage and grace, for their service and actions we are eternally grateful.

More Supporters
The State of New York does not imply approval of the listed destinations, warrant the accuracy of any information set out in those destinations, or endorse any opinions expressed therein. External web sites operate at the direction of their respective owners who should be contacted directly with questions regarding the content of these sites.
Visit Site