Honoring the Victims and Survivors of Hurricane Maria

To mark the first anniversary of Hurricane Maria, which struck Puerto Rico on September 20, 2017, Governor Cuomo established a commission to create a memorial honoring the victims of Hurricane Maria and to stand as an international symbol of the resilience of the Puerto Rican community.

The Memorial’s design, by Puerto Rico-based architect Segundo Cardona and artist Antonio Martorell, was recommended to the Governor by the Hurricane Maria Memorial Commission and completed one year after the Governor announced the winning design at the March 2020 Albany SOMOS conference. Now open to the public, the Hurricane Maria Memorial is located at the Chambers Street Overlook in Battery Park City.

The Hurricane Maria Memorial is an ascending glass spiral, evocative of a hurricane as well as a shell, which is a symbol of protection for living organisms against a hostile environment such as extreme weather.

The Memorial enfolds and projects beams of bright blue, red, and orange sunlight on visitors. The spiral is topped off by the upward rotating star of the Puerto Rican flag, depicting hope rising from the devastation.

The glass panels, painted by Martorell, include the poem "Farewell from Welfare Island" by one of Puerto Rico's most beloved poets, Julia de Burgos. 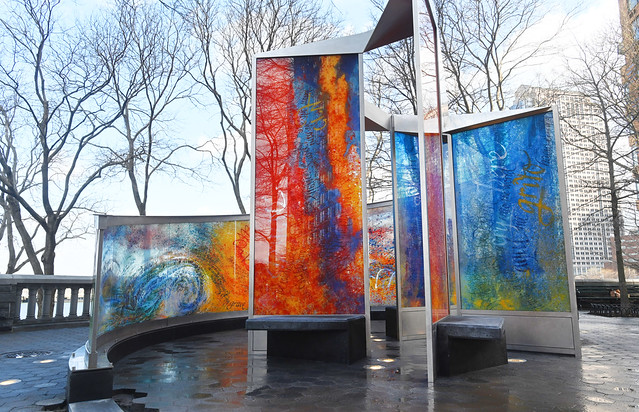 This memorial will show that this country loves and respects our fellow Americans in Puerto Rico and we will never allow what happened to happen again.

Calling All Architects and Artists

Honoring the Victims of Hurricane Maria

The Hurricane Maria Memorial Competition is seeking an artist to design and execute the building of a new memorial to stand as an international symbol of the resiliency of the Puerto Rican community.

The Commission has identified The Esplanade and the Chambers Street Overlook in Battery Park City in New York City as potential sites for the Memorial.

Eligible artists and architects must submit their application and design by October 28, 2019 at 11:59 PM in order to be considered.

Since the hurricane's landfall in September 2017, Governor Cuomo has traveled to Puerto Rico five times and has continuously directed critical resources to communities in need.

New York Stands with Puerto Rico
The State of New York does not imply approval of the listed destinations, warrant the accuracy of any information set out in those destinations, or endorse any opinions expressed therein. External web sites operate at the direction of their respective owners who should be contacted directly with questions regarding the content of these sites.
Visit Site