Governor Cuomo and Lieutenant Governor Hochul announced the installation of an illuminated fountain on the Cayuga-Seneca Canal in Seneca Falls as part of the state's programming commemorating the 100th anniversary of the ratification of the 19th Amendment. Placed just offshore from where the first Women's Rights Convention was held in 1848, the fountain is a joint initiative by the New York Power Authority, Canal Corporation and Seneca Falls Development Corporation offering New Yorkers a way to celebrate New York's role in the suffrage story and our state's history of bold women visionaries. August 26, 2020: Sojourner Truth Monument Unveiled at Walkway Over the Hudson

Governor Cuomo and Lieutenant Governor Hochul announced that the seven-foot bronze statue of eminent abolitionist and suffragist Sojourner Truth was unveiled at the Walkway Over the Hudson State Historic Park in Ulster County to commemorate the 100th anniversary of women's suffrage. Lieutenant Governor Kathy Hochul announced the kick-off of Women’s History Month celebrations by the New York State Women’s Suffrage Commission. The Suffrage Commission is celebrating Women’s History Month as part of the centennial of women's suffrage, marking a century after the Nineteenth Amendment was ratified. The New York State Women’s Suffrage Commission, chaired by Lieutenant Governor Kathy Hochul, launched a multi-platform social media campaign consisting of a series of several unique digital ads to run through the spring on Facebook, Twitter, and Instagram highlighting the 100th anniversary of women’s right to vote being enshrined in the U.S. Constitution.

The ads encourage audiences to commemorate the centennial by: In March 2019, Governor Cuomo and Lieutenant Governor Hochul announced that a Yonkers sculptor has been commissioned to create a monument commemorating famed abolitionist and suffragette Sojourner Truth.

The monument will be located at the Walkway Over the Hudson State Historic Park along the Empire State Trail in Ulster County. Sculptor and artist Vinnie Bagwell's proposed design for a 7-foot bronze statue of Sojourner Truth will help more fully include and represent women and people of all races and creeds who have contributed to the history of New York State.

September 2019: Watch a video of the statue in progress.

January 2020: View photos and watch a video of the statue's unveiling. In February, Governor Cuomo launched the 2019 Women’s Agenda to improve reproductive, economic and social justice for all New York women. Among other accomplishments and as part of the agenda, the Governor signed the Reproductive Health Act and pay equity legislation, enacted sweeping new workplace harassment protections, extended the statute of limitations for rape in the second degree and third degree and advanced a series of policies to reduce maternal mortality and racial disparities.

Read the full and updated report on the Women's Justice Agenda

Here's a portion of the opening letter from Lieutenant Governor Kathy Hochul, Chair of the Commission.

The highlight of the year was our celebration of New York’s suffrage centennial on November 6th. We lit up 30 major landmarks throughout the state in purple and gold, gathered nearly 600 women leaders at an official centennial celebration in New York City, announced the building of two new statues (Sojourner Truth in Ulster County and Rosalie Jones on Long Island), and launched a challenge calling on New Yorkers to look for the lost Declaration of Sentiments in their archives and storage, as well as in their hearts and minds (#FindtheSentiments).

As we look toward the national suffrage centennial in 2020, we will continue to highlight the leading role of New Yorkers in our nation’s journey to build a more perfect union.

January 26, 2018: The Declaration of Sentiments

The Declaration of Sentiments, modeled after the Declaration of Independence, calls for the moral, economic and political equality for women. It is the foundational document for women's rights but as far as we can tell, it is missing. Help us find this lost piece of New York State history. On November 6, 1917, women in New York State won the right to vote, three years before the 19th amendment granted the right to women across the country. In honor of the 100th anniversary of women’s suffrage, Governor Cuomo and Lieutenant Governor Hochul announced that the State will dedicate and build two statues in commemoration of suffragists Sojourner Truth and Rosalie Gardiner Jones. The statue of Sojourner Truth will be sited on the Empire State Trail in Ulster County, where she was born. Truth was born into slavery circa 1797, sold three times, and ultimately escaped to freedom in 1826. She went on to became a noted abolitionist and women's rights advocate until her death in 1883.

The statue of Rosalie Gardiner Jones will be built in Cold Spring Harbor State Park on Long Island. Known as "General Jones," she was born and lived in Cold Spring Harbor and was respected for leading suffrage "pilgrims" on marches from New York City to Albany and Washington, DC in support of women's suffrage. Buildings across New York State were lit up purple and gold, the colors of the suffrage movement, celebrating the anniversary as well. The New York Women's Vote Centennial Project is a partnership with the American Federation of Teachers and First Book celebrating the 100th anniversary of women's suffrage in New York on November 6, 2017. The competition invites teachers to develop classroom projects and activities to mark the suffrage centennial. The New York State Women's Suffrage Commission will select 15 winners from across the State. Projects may focus on women's history, civic engagement, the democratic process, equal rights, or a related topic. Educators and students are encouraged to explore the question: 100 years from now, when future generations look back, what will our equal rights legacy be? Projects for any grade, K-12, will be considered.

Applications can be submitted at this link and are due by October 20, 2017. Teen Voices at Women’s eNews is partnering with the New York State Women’s Suffrage Commission celebration of the 100th anniversary of women securing the right to vote in New York. The article by Hana Horiuchi is the first in a regular series featuring teen girls writing about what the right to vote means to them.

Hana Horiuchi was born Queens, New York, a borough rich with culture, language and diversity. She grew up in a bicultural household, which has played a huge role in shaping her life. Teen Voices, the global girl news initiative of Women’s eNews, is partnering with the New York State Women’s Suffrage Commission in celebration of the 100th anniversary of women securing the right to vote in New York. This editorial project will feature articles from teen girls writing about what the right to vote means (or will mean, for those under 18) to them, whether and why they aspire to be civically engaged, and how their generation should build on the suffragist legacy of advancing equal rights.

April 22, 2017: Commission Co-Sponsors Women in Politics: Past, Present, and Future

On April 22, the Commission was pleased to co-sponsor the Women in Politics: Past, Present, and Future conference at SUNY New Paltz. Lieutenant Governor Kathy Hochul addressed attendees, who also participated in engaging panel discussions with renowned scholars from across the country. 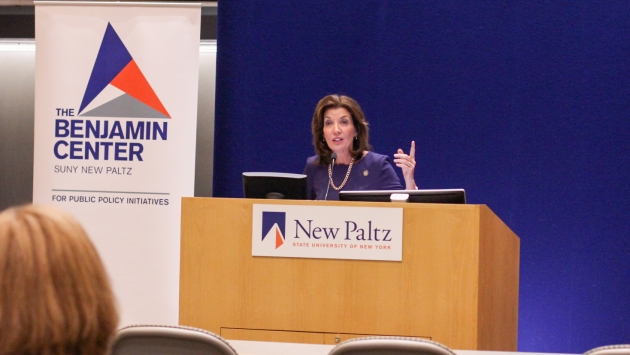 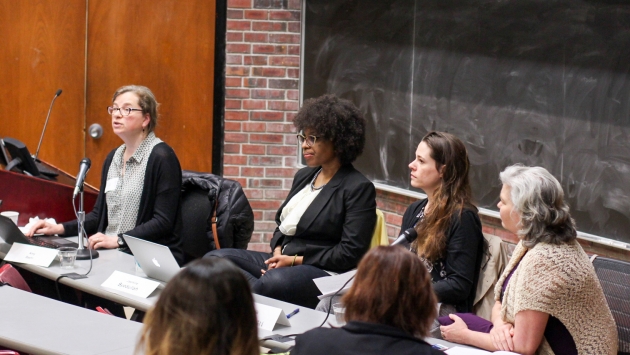 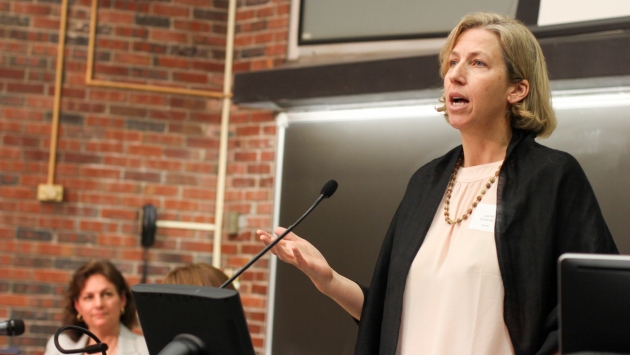 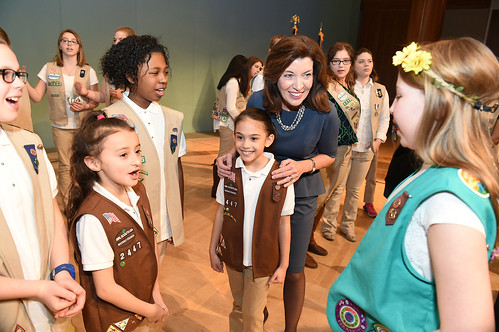 The Commission held its first meeting of 2017 on March 1, celebrating the beginning of Women’s History Month with the launch of the Women’s Suffrage Commission’s website, public exhibits at the Empire State Plaza and the Capitol Building, and special Capitol tours focused on the suffrage movement.

https://www.youtube.com/embed/lUstpulHzOk
The State of New York does not imply approval of the listed destinations, warrant the accuracy of any information set out in those destinations, or endorse any opinions expressed therein. External web sites operate at the direction of their respective owners who should be contacted directly with questions regarding the content of these sites.
Visit Site